HEMPEARTH Offers Its Own Brand Of Organic Hash

Home » HEMPEARTH Offers Its Own Brand Of Organic Hash

No matter what your preferred method for using hashish, the hookah, bong, bubbler, vaporizer, hot knife (not over the good floor), crumbled into your marijuana cigarettes, or baked into a hemp cake or pastry, one thing’s for sure, it is always a treat.

Hashish varies in colour, from blonde to very dark brown, and flavour, from spicy to nutty depending on the origin of the raw materials used and the region that it came from.

Hashish is a potent form of cannabis and a truly enjoyable concentrate.
It is THC rich and higher concentrations of CBD’s can also be found depending on the raw materials used.  Organic is always best.

Traditional pressed hashish is made from the trichomes of the cannabis plant’s flowers or buds.  Separating the trichomes from the plant is a labour intensive process that requires grinding and dry sifting the raw material until your left with pure resin crystals.
The resin crystal can be incorporated with small amounts of bud oil, but not necessarily, before being pressed under extreme weight until they form a solid mass.

As always, knowing the source of the raw materials in the hashish your getting is a bonus. 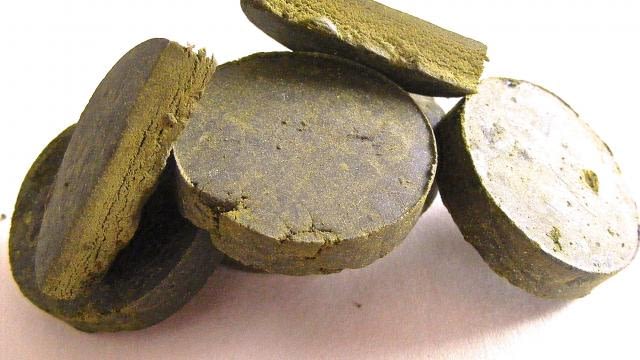 Hashish is great for rest and for sleep.

For those that wake in the middle of the night, a vape of hash might be just the ticket for getting back to sleep.  For a day when nothing will do but to sack out and just rest, a bowl of hash may help to get you there (without incessant guilt).  Hashish is also known as a terrific anti-nauseant and has been reported to have helped those in muscle spasm get fast relief.

Hashish has​ a lengthy ancient history

Dating back to about 900 AD in Arabia and in Persia  around 1000 to 1200 AD.  Archaeological evidence of hashish has also been discovered in Taiwan as long as 10,000 years ago. Presumably, thousands of years of use by the human has gone by undocumented.

HEMPEARTH Hash is made in Canada using old world techniques.

Traditional pressed hashish is not readily produced in Canada, in favour of the “bubble” style.

Starting with organic raw materials grown under the summer sun at high altitude, the cannabis is harvested at peak of perfection and dried slowly in under cool, dry conditions.  The resin crystal is extracted by grinding and sifting, a small amount of organic bud oil is incorporated and the mixture is pressed under thousands of pounds of weight.  It proofs at THC 34% and CBD’s 12%.